Improve your skills: writing and speaking


The Oxford Advanced Learner's Dictionary defines the term story as a description of events and people that the writer or speaker has invented in order to entertain people; that would be true provided the story is imaginary. That's why another definition is provided: an account, often spoken, of what happened to somebody or of how something happened; this definition would be the correct one for real stories.

Now we will have a look at some of the aspects that should be taken into consideration when writing or telling a story. First of all we need to express the order in which the events occur; some of the basic expressions we can use for sequencing include first, next, last, before, sometimes and now. But in order to improve the quality of our story some synonyms should be used:

- First: the first thing, at the beginning, in the first place.
- Next: then, after a while, shortly afterwards, as soon as.
- Last: at last, in the end, after a long time, eventually, finally.
- Before: earlier, formerly, not long ago, previously.
- Sometimes: at times, from time to time, periodically, occasionally.
- Now: recently, by now, currently, until today, meanwhile.

Another aspect we must pay attention to is tenses. Look at this video for a quick explanation of tenses. Since our story (either real or invented) is usually something that refers to the past, the use of narrative tenses is considered to be a must. The following are examples of different narrative tenses:

- Past simple: I spent last summer with my grandparents at their house by the lake.
- Past continuous: My friend Joan and I were swimming in the lake when we saw an enormous...
- Past perfect: We had never seen such a big...
- Past perfect continuous: We had been waiting for an hour to be rescued when Joan noticed something...

When telling your story your main objective should be to catch the attention of your audience. You would want your story to sound as exciting as possible, to appeal to your audience interests and make them reflect on what they have just read or listened to. Appropriate vocabulary will make the story more interesting, therefore we should choose adjectives and adverbs carefully in order to add that element of excitement. Use strong adjectives rather than gradable adjectives to emphasize what you are trying to say: shattered, freezing, terrified, disgusting, starving, gorgeous, fabulous, hilarious, delighted, awful, fascinating, terrific, huge, tiny, devastated... Use adverbs to add more information, especially adverbs of degree: absolutely, particularly, extremely, remarkably, fairly, terribly... and adverbs of manner: awkwardly, fortunately, mysteriously, suddenly, unexpectedly...

And finally use linking words to add coherence and cohesion to your story. Connectors can express: reasons (due to, because, since, as), results (therefore, consequently, as a result), contrast (however, nevertheless, despite, although), giving examples (for example, for instance), adding information (in addition, furthermore, moreover, besides).

To practise this here is a writing prompt that can be used in class with B1-B2 students: 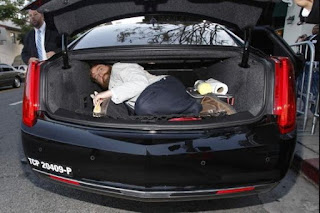 You wake up in the boot of a car after two days missing. With you there is a bag full of money, a plane ticket and a wallet with a fake ID card. Little by little you start to remember things. Write the story of what has happened to you in the last couple of days.

STUDENT'S CORNER
This a blog I have created along with my B1 students to share activities, quizzes, essays and keep everyone informed of the content of the classes.